FOR NON-LOCALS ONLY
online-girls-tarbiyyah-program
transparent
600
#800000

Letter from the Head Mu'allimah:

Alhamdulillah by the grace and mercy of Allah Subḥānahu Wa Ta'āla we have successfully completed four years of Girls’ Tarbiyah program – under the guidance of Moulana Haroon Abbasomer sahib (Rahimahullah) & Moulana Mohammed Abbasomer sahib Damat Barakatuhum from South Africa, and other scholars from Sub-Continent and US. The existing batches will continue with advanced books in Aqeedah, Quran, Hadith, Fiqh, Seerah/Hayatus Sahaba, Qasas, Arabic, Sunnat/Aadaab, and Duas.

Because of high demand In shaa Allah we will be starting a new batch this year, September 2021.The following are some highlights of the program:

We are also working towards organizing motivational talks by guest speakers on various Islamic subjects.

Note: Updated list will be sent to those who register, inshaaAllah.

Admission is based on the following:

Certificates will be awarded upon successful completion of the course to recognize student achievement.

Mu’allimah Umme Taha is a certified Doctor of Medicine from Hyderabad, India. After coming to USA, she continued her medical studies and obtained a degree as a diagnostic medical sonographer. She completed a brief 2 year Aalimah course in English from Darul Uloom Zakariyya, NY in 2011. She then further pursued Islamic education for 5 years and graduated with an `Aalimiyyah sanad from Darul Uloom Zakariyya, NY in 2016. Thereafter she graduated from 1yr Muftiah course(specialization in Fiqh and Ifta) in 2020 and 1yr specialization in Sarf and Nahw course in 2021 from Salihaat online academy.Alhamdulillah, she has been teaching tarbiyah classes since 10 plus years (aqeedah, fiqh, arabic,seerah, Quran, hadeeth, akhlaaq etc.) for children and sisters of all ages. She also gives lectures on various Islamic subjects from time to time .

), fiqh (jurisprudence), aqeedah (belief), Arabic grammar, and akhlaq/adab (characters & manners) to sisters of all ages in Central Jersey and continues to do so. She has taught in after school programs in many masajid of Central Jersey, including NBIC, ICEB, ISCJ, MCNJ, MCMC, & IDEA. She has also led halaqas and workshop intensives for young Muslim sisters and gives lectures at various places from time to time.

Mu’allimah Umme Inaam completed the 5 year `Aalimiyyah course from Nawal Academy (Chicago, IL), which was run under the supervision on Mufti Nawal-Ur-Rahman Saheb DB (originally from Hyderabad, India), where she studied different sciences of Shari`a, graduating in July 2017 with an `Aalimiyyah Sanad. She is studying Tafseer-E-Quran under Mufti Ataur Rahman Sajid Saheb (DB).
She has been teaching Arabic Morphology (Sarf) to students. She has also been teaching children and girl’s tarbiyyah classes.

Mu'allimah Binte Saif graduated as an Alimah in Islamic Studies from Madrassah Mu'einul Islam in Zakariyya Park, South Africa in 2017. She completed Hifẓ al-Qur'ān at Masjid Omar bin Abdul Aziz in Atlanta, Georgia in 2013.
She teaches Quran and Islamic studies to various levels and age groups. She is passionate about serving and mentoring Muslim youth and organizes Halaqas and social events for Muslim sisters in her free time.

The above are approximate timings unless otherwise notified. 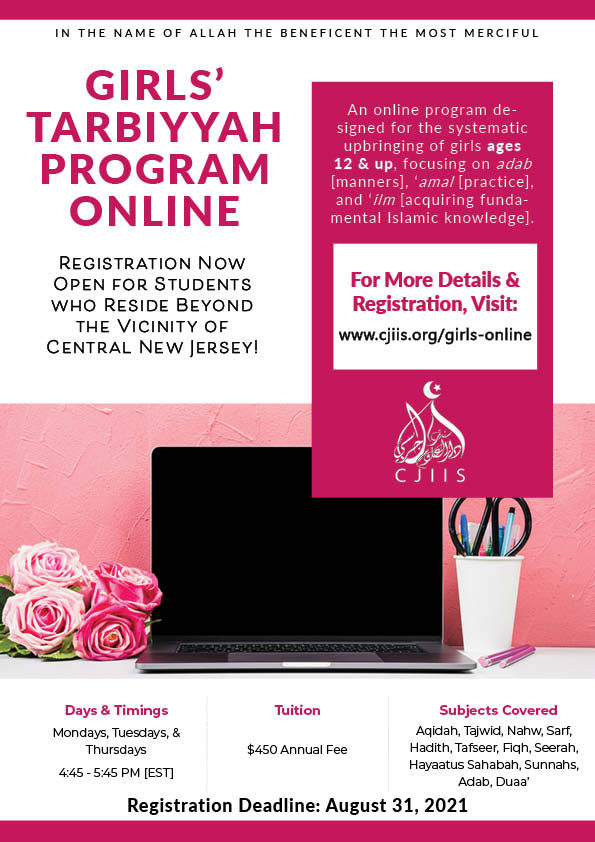